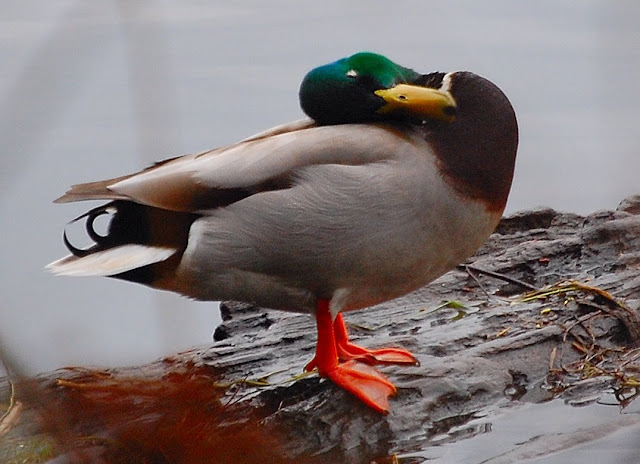 Everyone feels like this on Boxing Day don't they?

Time for a little exercise to burn off those calories 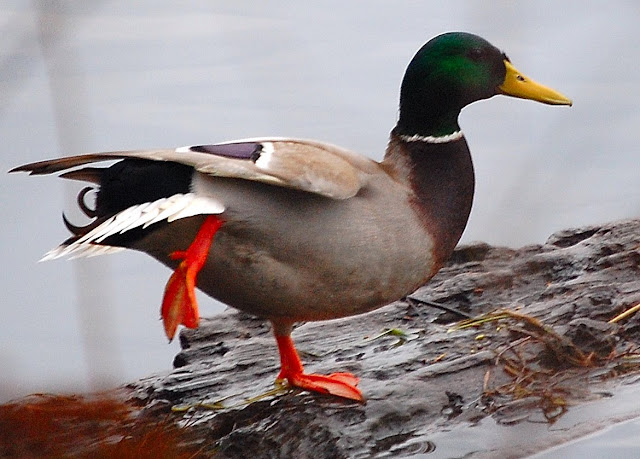 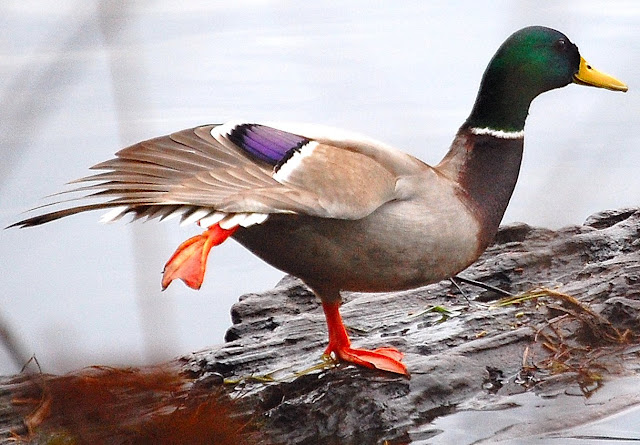 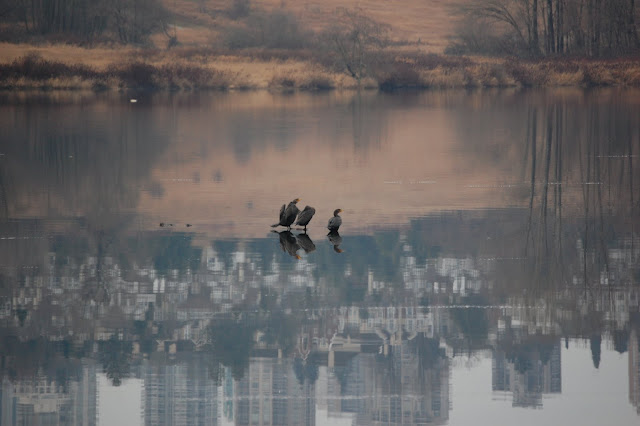 It was a green Christmas here on the lower mainland this year. Yesterday Lucy and I too a long walk at the lake to clear our minds and burn some calories. It was beautiful there with the misty look that happens to the sky and surroundings on a cold day in December.
I took this picture of the cormorants that seem to sit on top of the water on the lake. They have been there for months now and they look like such a happy family.
Last night was our annual community dinner. We always go to the downtown east side, one of the poorest neighborhoods in Canada, to feed dinner to the people who have so little. Old men and women, young women, babies, the disabled, the mentally ill and those that just have no one to celebrate the holiday with  lined up outside in the freezing cold for a little food and a little warmth and kindness.
After... you come home and sit down to a warm meal, good food and the company of your close friends and loved ones you can not help but be a little changed by it.... a little more grateful.

Have a safe and happy holiday!
Posted by Catz at 9:51 AM 3 comments:

Well it is Christmas time and Miss Lucy made a visit today to the nursing home of a very brilliant gentleman we know. He is 96 years old, but smarter than you or I, but I am not sure if he is smarter than Lucy. 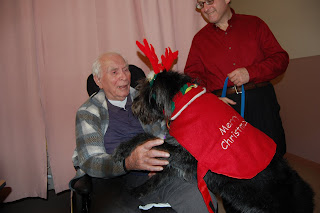 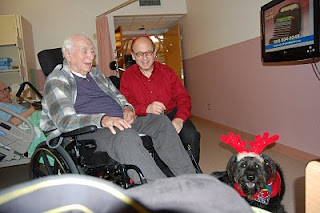 As you can see she got dressed in her Christmas finery for the visit.
Posted by Catz at 9:44 PM 3 comments: 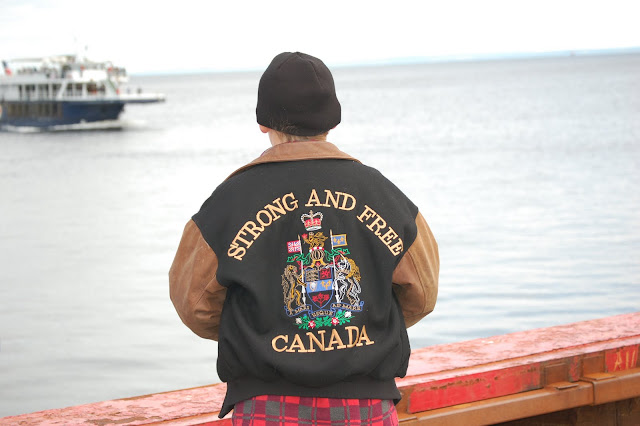 Two years ago when I was in Quebec City on vacation I took a trip up the Saguenay to view the whales. While waiting for the boat I spotted this young man on the dock and snapped this picture. His jacket made me think about this country I live in.

I had forgotten this picture until I came across it the other day. It seems fitting that it should come up now because my partner and I have spent a great deal of time recently talking with people about this very issue.

Twenty years ago I would proudly have stated that Canada was indeed free and indeed the best place on earth to live. Today I am not so sure. Today we have a government system that punishes their MPs for voting the way their constituents want. Today we have thousands of people living  on our streets for want of proper housing. Today we have young men and women dying in Afghanistan for a war that is not ours, can't be won and for people who don't want us there. Canada used to be a country of ordinary folks. Working men and women who took pleasure in raising their children and tending a small home. They were proud of the work they did and their only expectation was that they would earn a living decent wage to provide for their families. Today, especially here in British Columbia, many workers are living below the poverty line as government has torn up work contracts and privatized many industries that are now run by huge corporations whose only concern is the bottom line.The gap between rich and poor is getting bigger every day.

When I grew up voting was considered a privilege and a duty. Now we have government parties who are clones of each other - vying for votes where 52 % of the population in some areas are so disillusioned they don't see a reason  to vote anymore. Today it is considered normal and expected that politicians will lie to us to get us to vote. It is considered normal for the politicians to base their policy on polling rather than on what is  best for the country.

In my opinion NO!

Baby its Cold Outside 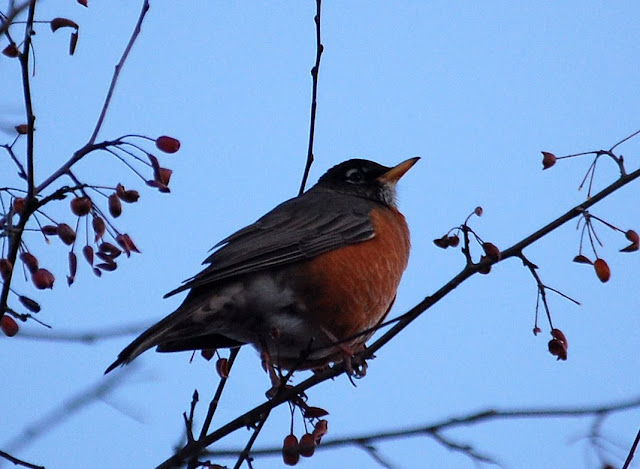 I caught this little guy sitting on a branch in Deer Lake Park early this week.  The temperature has dropped to -7 and while the days are sunny they are very very cold.
Posted by Catz at 4:00 AM 3 comments: 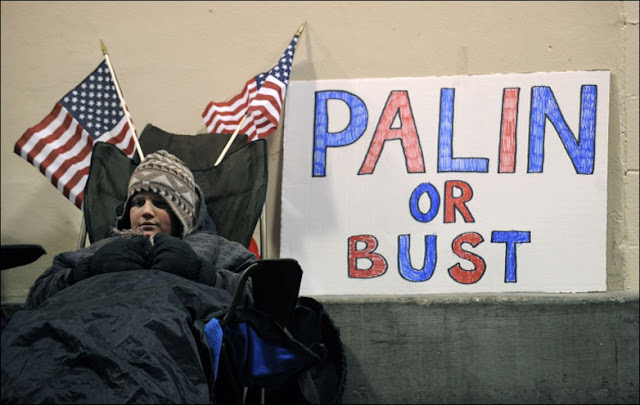 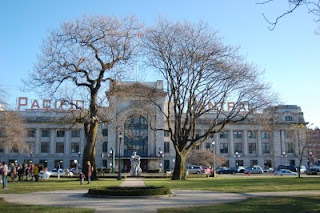 Sunday morning brought beautiful sunshine, but wind and brutal cold. My partner and I dressed in layers of clothing, scarves, gloves and boots and with Lucy in tow headed out to the National Day of Mourning in Thornton Park. On December 6th, 1989 14 women were murdered by a lone gunman with a semi-automatic weapon at a college in Montreal. These women were ordinary women just trying to make their way in this world. They had done nothing to the gunman, Marc Lepine personally, but in his mind they represented everything that was wrong in his life.

Thornton Park has been set up as a memorial for these women and there are fourteen  marble seats with the names of the women on them. We are all given a scarf with either a picture or a saying about this event to wear around our necks. Then everyone walks in a circle around these seats while a Choir is singing.

As I walked the circle shivering in the wind and fighting to keep my scarf around my neck I thought how the weather seemed fitting to remember these women who were murdered for nothing more than being women.

It was uncomfortable. My feet soon went numb from the cold and the skin on my face was freezing and stinging from the wind beating against it. It made me realize that many of my fellow sisters around the world are living under conditions where they are uncomfortable all the time. Women have long been considered a lessor being and as such their lives have never been given the value that they deserve. In many countries women are sold into slavery from birth, raped as part of a war strategy, killed because they are deemed to have little value and made slaves by their husbands family.

At the end of the memorial the scarves are hung from a line between two trees  and as I left the park I looked back at these red and white scarves flapping around in the wind and wondered how long it was going to take and what it is going to take before the lives of women around the world are considered as valuable as the men. 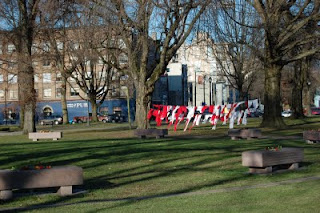