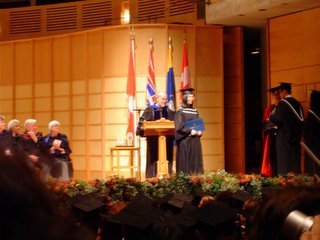 I was filled with emotion as I watched this young woman take her place on stage yesterday to receive her second degree from the University of BC. To have been able to watch this young woman grow from a small frightened sad little girl to a happy young woman has been one of my greatest pleasures in the last eight years. I so remember the first day I met Diane. She was so eager to speak to me and I think so happy to have someone to tell about her beloved life in China. It was not easy to see such a homesick little girl trying to be so brave. She would smile shyly at me as she struggle to act as translator for her parents and me. Sometimes I knew that she wanted nothing more than to tell me her own tale. Read me a Chinese story or explain a joke book from her country. She especially like to share the beautiful Chinese music that told such fascinating stories of the country she had left behind. She would tell me, when we were alone, that her one desire was to make her parents proud of her because they had struggled and sacrificed so much to bring her here. Eight years later with two degrees to her name... I think she can finally feel that she has accomplished her goal. Aero and Flora, her parents, have also accomplished their goal. Through their sacrifice and perseverance they gave their daughter a much better life than they had ever hoped to have. To have been allowed to play even a little part in this has been a great priviledge.
Posted by Catz at 9:37 PM