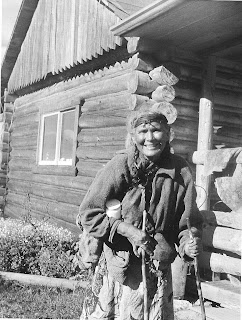 While browsing a copy of BC Magazine I came across an article about a native woman by the name of Chiwid. She was born in the Chilcotin in 1903 to a Tsilhquot'in woman and a white man. Her name Chiwid in Tsilhqot' means chickadee. It is said that she was a raving beauty with long shiny black hair and she married a Tsihquot'in horse trainer and legendary rider who was known for his meaness and he often beat her. Sometime in 1932 or 33 he injured her so badly by lashing her with a logging chain that she had to be taken to hospital. When she recovered she moved outdoors to begin her life as a nomad.
My belief upon reading to that point in the story was that this woman was like a lot of other native women of their time. They were strong women who often were abused in their relationships and determined to live on their own moving from place to place hence the term nomad. However, with Chiwid, there was a great deal more to the story.
Chiwid lived alone with few possessions not even a tent nor sleeping bag and without shoes for her feet or a coat for the cold Chilcotin winters. All she had was a stocking cap, black cotton stockings, moccasins, a skirt she made herself and a tattered men's sports coat which was given and one blanket! She did own a rifle, two old frying pans, a few pots, a knife, fork and spoon and a double-handled axe. She took, from her marriage, a share of the family cows and pastured them in wild meadows. In winter she fed them with hand cut hay from the grasslands. She did apparently have some horses, but they were unable to survive the harsh conditions she lived under.
To survive and feed herself she hunted moose and deer, snared squirrels and birds to roast over her fire. She caught fish, dug up wild potatoes and picked berries drying them for winter. She traded squirrel pelts for sugar, flour and tea at the Tatla Lake store and in 1959 her life go a little better when she got a small pension from the government which was held for her at the store.
She was an amazing woman in many ways, but what astounded people of that day was her ability to withstand the cold. People tell of watching her casually take off her moccasins in the middle of winter and dump the snow out before replacing them on her feet. In the deepest winters where the snow was many feet high and the temperatures would drop to -40 she could be seen huddled beneath a small tarpaulin beside her campfire. People who tried to take her in say that she did not like to be in the warmth and would retreat back outside finding comfort in the cold.
While married to her abusive husband Chiwid had two children. When they were old enough they were sent to a mission residential school in Williams Lake. Years after Chiwid began her nomadic life she gave birth to a third daughter - Mary Jane. This daughter lived in the forest with her until she was school age and then she too was sent to the residential school in Williams Lake
Chiwid, it was said, was a woman of few words, but had a luminous smile as you can see in the picture I scanned from the magazine. Even in her mid-60s you can see the incredible beauty she radiated from within as well as without.
Native elders have said that they believe the way she kept warm and alive was through dreaming of being some type of animal probably a coyote. The natives believe that is how she stayed warm.
Some time in the 1980's after almost 50 winters in the outdoors, blind and unable to hunt any longer, she moved to the Stone Reserve to live with friends who cared for her. She died in 1986 at the age of 83.
The province of British Columbia is rich with stories like these. Real people who over came hardship, survived in unusual circumstances and became legend. I love to read about them. This story in particular intrigued me and made me wish that I could have met this beautiful coyote woman.
Posted by Catz at 8:41 PM