Three weeks has to be a record for the longest period I have gone with out blogging since I started this blog. I have been so busy that there has not been a moment I could actually write a word. Today when I started writing I thought I would catch you all up on the things I have been doing, but I quickly realized that there is not enough time to fully explain to you where I have been and what I have been doing. There have been a multitude of events and rally's covering everything from freeing the Cuban Five to Latin American festivals, Japanese festivals barbeques in the parks, eating barbequed salmon that was cooked over a pit fire in the middle of the street and the Gay Pride brunch and parade of which I took hundreds of photos. I have also been to several ball games and helped a friend move! Just writing about some of these things exhausts me, but it has been a lot of fun.
This past weekend I went to Seattle with a friend to visit Pikes Place Market where they had the biggest seafood I have ever seen in my life! The scallops looked like platters and the lobster tails, shrimp and Alaskan crab legs were huge! I had to stop myself from buying on of everything and cooking it on the spot! 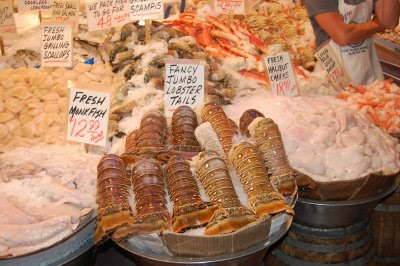 We took a tour of the underground city that was built after the fire in the 1800's. It was a fascinating piece of history that I had never heard of before.

All in all my summer has been fabulous. The weather, rainy and chilly today, tells me that summer is beginning it's descent into fall before leaping into winter. I can almost not bear to leave this summer behind!

I have tried to keep up with everyone's blog over this period of time and I have missed you all!