Winter arrived with a vengeance this week. We have had about 35 - 40 cm of snow and if you don't have to leave the house it looks lovely. Unfortunately we were not that lucky. 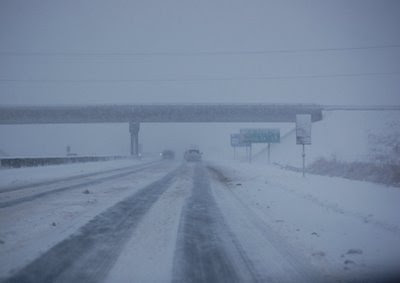 On Sunday while the storm raged and most people stayed off the roads we made an hour and a half long trek to take my daughter to the dentist and then on to visit a relative who is in a hospice near her dentists.
The snow did not let up most of the night and this morning it was almost impossible to get anywhere in the city. Most of us are not used to this kind of weather and here in lotus land our municipalities do not really have the capacity to deal with a major snow fall of this kind. Most of the time they only manage to clear the main roads and unlike eastern Canada we do not have the capacity to cart away the snow so we have piles of it taking up one lane of most roads. The side roads are almost impossible to get around on. Tonight while I have been typing this two vehicles have gotten stuck on the corner outside my house. My car is parked in Burnaby where I ended up getting caught by the storm and I doubt I will be getting it home till after Christmas making finishing up those Christmas shopping tasks almost impossible. 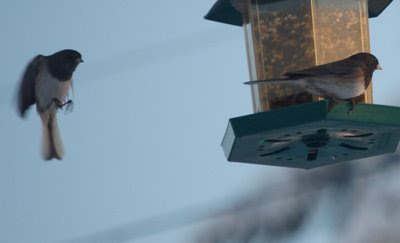 However not all is lost in the snow. These little birds were a delight to watch outside of my friends house today. They were busy fighting over the seeds the landlord had put in the bird feeder. 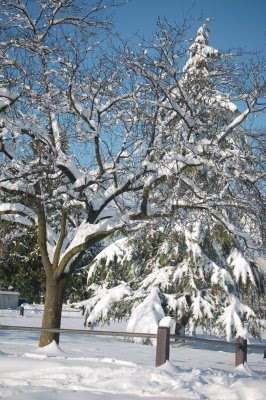 And the trees in the park look lovely in their winter whites.
It has quit snowing here this evening, but the temperature is expected to get to -7 tonight and more snow is expected Christmas eve and Christmas day. 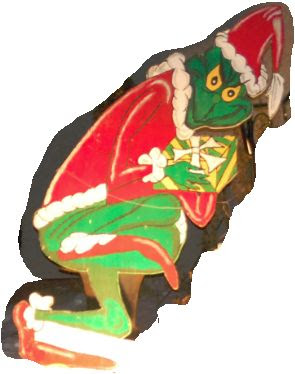 I am hoping that the Grinch will not steal Christmas this year!
Posted by Catz at 5:43 AM