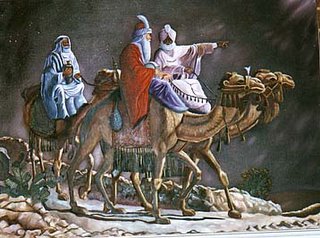 Some months later, baby Jesus received a visit from a group of international travelers, Magi from the east. They had followed a special star in the sky, which they interpreted as announcing a newborn King of the Jews. They brought with them expensive gifts of gold, frankincense and myrrh, and when they saw Jesus, they fell down before Him and worshipped Him. They were the first of a host of people from every corner of the world who would someday also worship Him.
Posted by Catz at 6:03 PM