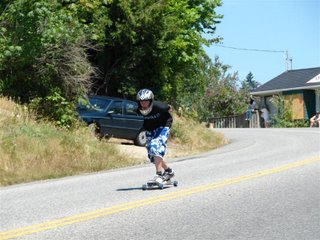 Got up at the crack of dawn to go to the Sea Cavalcade on the Sunshine Coast again this year. It is beginning to be a tradition to go there and spend a lazy day in the sunshine watching the parade and eating hot dogs!
This time the day was hotter than I have seen it in many years in July. The temperature got up to 34 degrees at times, however it did not stop this kid from racing down the hill over and over again just a few inches from the scortching pavement! He was quite a site to see and I kept trying to get pictures of him as he sailed down the hill just ahead of the next float. I must admit I was mesmerized by the speed at which he flew down there and was very glad that he was wearing protective gear on his head at least! After taking several shots of him doing this he decided to take off his helmet and pose for a picture! 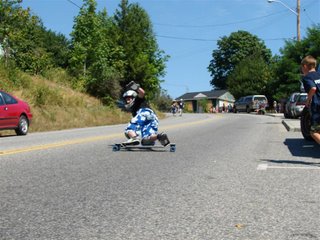 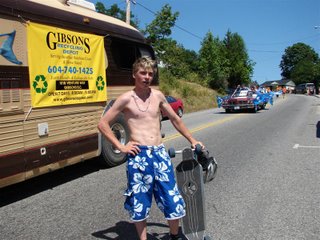 I think maybe this kids has a future as a real performer! Thanks for the show!