BC Day or just the First Monday in August! 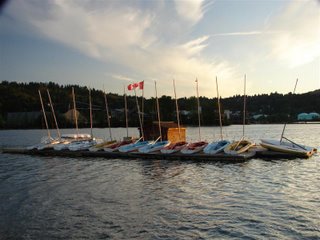 This weekend is BC Day in Canada and that really means nothing! Nothing except for a holiday! That is really all the first Monday in August is about. We don't really celebrate anything on BC day. It is not just a holiday in BC, but apparently in several other provinces as well . It is just the last long weekend in the summer and some politician recognized that one year, made it a statuatory holiday, and probably got himself a lot of votes! Even if no one remembers him/her now. Isn't that just the way of life!
So I spent part of my day sitting at Rocky Point, a little park and marina in Port Moody, contemplating what would represent BC Day. I think that this picture of sail boats and the Canadian flag said all that needed to be said about BC Day!
If you are lucky enough to be celebrating it - HAVE A GREAT WEEKEND! If not, find a politician who needs votes in your province? country ? and tell him/her about our deal! Hey, I'll bet George Bush would be interested!
Posted by Catz at 11:16 PM