VANOC and the FLY!

Yes ... flies... or I should say fly as there is only one, has taken up residence in our apartment.  I have no idea where he came from or why he seems to be the only one. For that matter I don't know that it is a HE, but no woman would be as annoying as this guy. The fly keeps flitting about my desk as the worst times. Either I am on the phone trying to make appointments and there he is bouncing off my desk lamp or worse walking across my computer screen. One time he was actually cheeky enough to bounce his creepy self off my forehead. I grab magazines, rolled up newspapers and anything else handy and try to smack his little brains out. But he is clever and just when I think I am about to get him he flits off and hides somewhere in the house only to reappear at the most annoying times. Funny thing is he never seems to bother my partner one little bit. In fact my partner claims to have never seen the little bugger.

My guess is that the fly is here because the weather in Vancouver has been so mild much to the chagrin of VANOC the Olympic bullies organizers. With the winter games about to begin VANOC is about as annoyed with the mild weather as I am with THE FLY! They have had some snow on the mountains, but not in the amounts they had hoped for and the temperature keeps on being very mild without much relief in the forecast. So the weather is as annoying to VANOC as the fly is to me. However, while I will continue to roll up newspapers to swat frantically at it, I, unlike VANOC, will not spend a small fortune to resolve my angst. 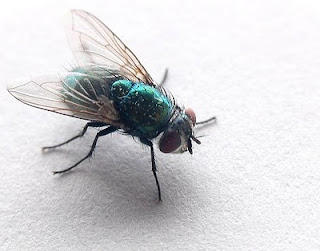 VANOC and the fly have much in common. They are both annoying!