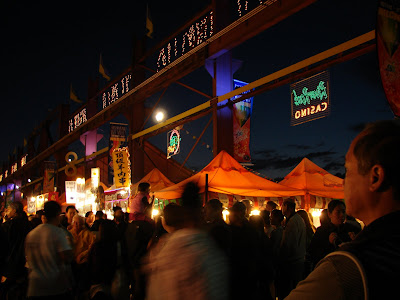 The Chinese Night Market in Richmond is wildly popular. It has been attracting hundreds of eager bargain hunters for seven summers now despite the fact that it is difficult to find and very crowded. The market is only open from May to October and every year I ask my Chinese friend to take me to it, but it never seems to happen. My friend's excuse is that he left China to get away from Chinese merchants. Go figure! Being on vacation I decided that a trip to the market might be just like a trip to China and so off I went this evening.
I got there just before sundown as the market opens at 7 pm and my first impression was that it was very similar to some of the large flea markets around the lower mainland. The difference however is in the presentation. The night market comes alive as the evening wears on. The air is filled with the scent of Asian specialty dishes like sui mai and steamed filled dumplings and meat roasting on skewers. If you are like me and love Asian food it is a deadly place to be as you just want to try a little of everything and it is all so reasonably priced. I had some fried tofu with hot sauce, some shrimp dumplings and gyoza (fried dumplings) it was all delicious.
There is a stage with live music and dancers which attracts lots of young people and the whole place is lit up with neon lights making it look like any market street in China.
The bargains are everywhere most imported from China of course. From electronics to under wear you name it you can buy it for cheap. The biggest attraction for me is the look alike designer handbags. There were many merchants selling them so I am relieved to know that I am not the only woman with a penchant for handbags. Everything from Gucci to Burberry look alikes. Some of them were of very good quality and I finally caved in and bought one from a seller named Vivian. She was a lovely woman and she told me that she and her husband own a wholesale company here that supplies some of the high end retailers in the city and she brings the surplus here to sell. I paid $35.00 for a look alike that would have cost $4000.00 were it the real thing. The people I hang out with will never know the difference. Had I gone to a retail outlet in the city and purchased this bag it would easily have cost me about $100.00 so I think it was an excellent buy.
Finally after three hours of walking I could take no more and staggered to my car exhausted but satisfied and indeed having felt like I had spent a little time in China. 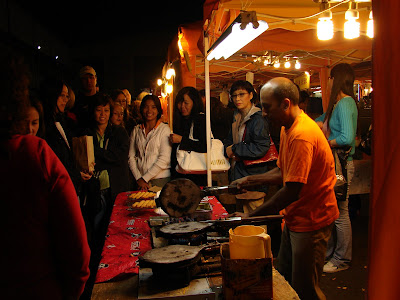 This is a merchant in the food area and I have no idea what he was selling. It appeared to be some kind of waffle that is made on these very unusual hot griddles that he very cleverly and skillfully juggled and flipped all the while kind of dancing and bouncing from one place to the other to the delight of the crowd. He had a huge line up waiting to purchase what ever it was he was cooking and I would have loved to try it, but did not want to wait that long.
Posted by Catz at 10:56 AM