Harrison - a snowy weekend get away! 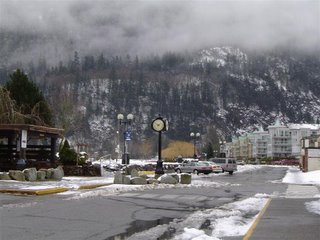 I decided it was time for a little winter get away. I love Harrison, but had never been here in the middle of winter. The night before I left the mountains and valley surrounding Harrison had a good snowfall. By the time I arrived the snow was beginning to melt, but it was still very beautiful and very quiet. Few people were on the streets of this usually busy little tourist town making it even more attractive to me.
However, inside the resort there were lots of other people with the same idea as I had. To get away from the hustle and bustle for a little rest and relaxation and there is no better place to relax than in the mineral pools at the Harrison Resort. I could not believe how many chilren and adults were happily playing comfortably in the pools surrounded by snow covered mountians. The water was so nice and warm and the view delicious. It felt almost surreal.
Posted by Catz at 10:06 PM No comments:

Who, being loved, is poor?
Oscar Wilde


It has been a long time since I last wrote. I don't know where I have been really. Just walking around on planet earth looking for my spot I suppose.
Lots has happened in the last two months. A New Year has rung in. Gong Xi Fai Choi was celebrated and it is the Year of the Dog for my Chinese friends. We had another election, we have a new Prime Minister who before the his oath of office had been heard around the world he had already made decisions that smacked of impropriety and corruption. All things he promised in his campaign he would put an end to. Ahhh..... the more things change the more they stay the same! Who said that?
Started January off with a trip to Victoria and a one night stay in the Marriott Hotel. My daughter and I shopped till we dropped, ate a wonderful meal in the gourmet restaurant at the hotel, had a few drinks and laughed till we cried.
The rest of January and most of February has been spent trying to dodge the water. Rain, rain and more depressing rain has pounded down upon us making us all think that maybe it was time to start building another ark. To make matters worse the rains were accompanied by high winds which brought flooding and destruction to many peoples lives here on the coast. Fortunately for us the gods smiled upons us - we can't afford water front property!
Lucy is ... well Lucy. She survives almost anything as long as she gets two walks a day, stolen tid bits of food and lots of cuddles. Oh yes and a nap on my bed every afternoon!
Posted by Catz at 8:44 PM No comments: