Day Two of the Bog Fire 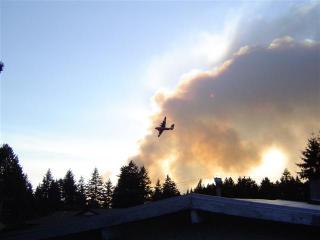 This morning, to the untrained eye, the bog fire appeared to have thankfully settled down. The smoke coming from it was not as black, the wind seemed to have died a little and the flames that were shooting from the tree tops the night before appeared to be out. It was a happy site for me and even more so when I realized that the part of the bog that Lucy and I walk in appears to be untouched as yet. However, turning on my raidio as I drove past the site on the freeway this morning, I am informed that in fact the fire almost doubled over night (20 hectares) and they were bringing in the gigantic Martin Mars water bombers today. Late this afternoon the bombers began flying past my kitchen window and none too soon as the fire has increased another 3 hectares! I am praying that this fire will soon be out.
Posted by Catz at 9:13 PM