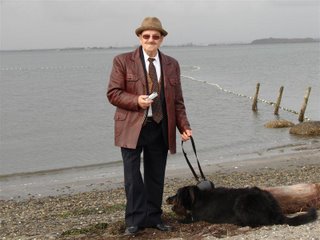 We had an early northern visitor this year. He blew in from the north over night and brought us gifts and a lovely dinner! One might think he was Santa Claus, but even better it was Alphonse.
Al, having been in the Yukon for over 50 years, can be considered a Yukon pioneer in my opinion. As a school boy he escaped Poland via France with his family when the Germans invaded and it would take a better historian than I to tell you the year that occurred. He tells me he spent some time in the British Military before coming to the Yukon to work for the mines. He eventually married, started a very successful painting business and settled in Whitehorse where he still lives today.
When I talk with people like Al I can't help but wonder what it must have been like to live in a place where only the hardiest and most determined of people managed to live successfully. Yukon in the 40's and 50's was still a very rough place to live with few amenities and to have been able to start your own business and be successful is a great feat.
Thanks for visiting Alphonse!