Stand Up Against Poverty

Most of us are well fed and comfortable and we tend to think of poverty as being something rarely seen. When we do see poverty we often tend to resolve our conscience with the belief that a once a year donation to the local food bank will resolve the issue. The truth is that poverty is an insidious disease that often the start of a life and death struggle for survival. Many do not survive. In fact Stand Up Against Poverty tells us that 50,000 people a day die in this world from extreme poverty! No that is not a typo! And if you think that is only in third world countries like Africa - think again. The gap between the rich and poor is getting wider all over the world. Here in Vancouver all you have to do is drive down to the east end to see people sleeping in doorways, begging on sidewalks and lined up at the food banks. Despite what the media would like us to believe many of these people are on the streets through no fault of their own. Some are there because of the mismanagement by government. Mental health patients were turned out of the hospitals with no support or housing made available to them. Seniors, single parents and disabled have few housing options open to them and buying food and clothing on fixed incomes and in some cases single incomes can be an impossibility. All this in a wealthy country. Imagine the devastation in poor countries often run by corrupt governments.
In 2000 189 leaders signed the Millennium goals and promised to halve extreme poverty by 2015.
October 16 & 17 th Stand up Against Poverty calls for people around the world to stand up and speak out. Remind our leaders that they made this commitment and the clock is running.
Today I was asked to take a picture of 50 Invergary Learning Center students standing up and speaking out about poverty. 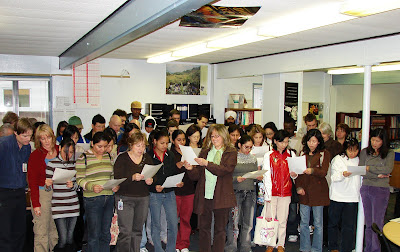 Invergarry Learning Center Staff and Students Standing UP and Speaking Out against poverty.
Posted by Catz at 4:57 PM