Finally a Moment to Catch Up!

This summer is turning into the summer from hell! First it was Lucy down with a bad abscess, then it was the car, then it was the car, then it was the car! (no that is not a typo) The car is giving me fits. Why is it that I always have problems with my car that no one can find? Am I special or something? Or do I just get stupid mechanics? Almost every car I ever had has had a problem that I have spent hundreds of dollars trying to find out what was wrong with it only to find out that it needed a fifty dollar part that took ten minutes to replace. The verdict is still out on this one. So that is how my week went one thing after another. Sometimes I feel as though there are so many problems to solve that there is not enough time to live life. That was last week.
This weekend I helped put on a fund raiser for the NDP in this riding. It was a Hawaiian themed pool party that the weather did not co-operate with us on. It didn't rain exactly, but it wasn't really warm either. However my daughter and I made a cute cake for it all thanks to Betty Crocker. 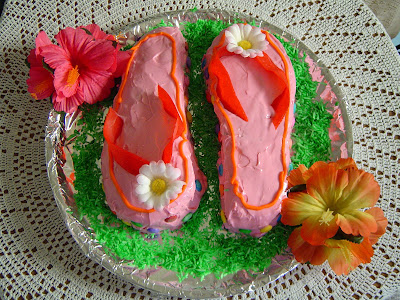 Okay so it doesn't look exactly like Betty Crockers, but you have to admit that for someone who bakes once a year at best it was not bad! However my friend Denise who hosted this party seemed less than impressed! Oh well!
The event was a lot of fun because we have the President who is the most fun of all the constituencies presidents. Okay I know that I am prejudiced, but Brenda thinks so too and she is his wife. He is always good for a smile and a laugh. Without him I don`t know where this riding would be. 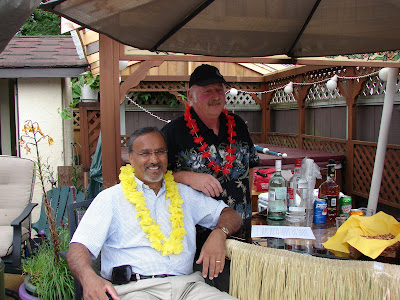 Here he is tending bar with his good buddy Harry Bains the MLA for Surrey-Newton. And of course he helped himself a little at the bar too! 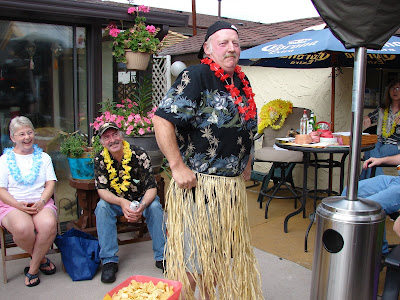 Then did a little Hula Hula for us all! Thanks Bob I like your style! 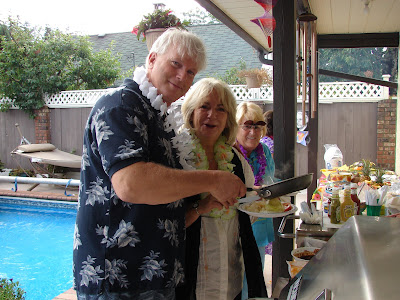 The food was great and cooked with love by our very own Al Rondpre shown here serving the first Hawaiian burger off the grill to Sue Hammell MLA for Surrey-Green Timbers.
Everyone dressed up in theme for the event including me. I wore a blue Hawaiin silk shirt over a blue halter top, white cutoffs and I had fresh orchids in my hair. I know you are dying to see the picture of me so I saved the best for last. 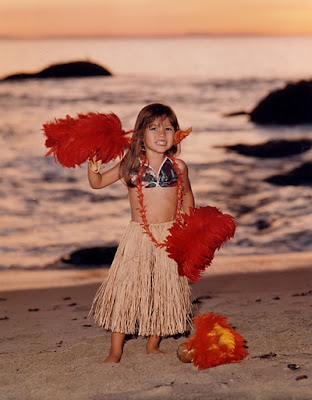 Unfortunately though you will have to settle for this adorable picture of someone`s little girl dressed up Hawaiian, because as I was the photographer no one got a picture of me. She's much cuter anyhow.
Aloha!
Posted by Catz at 10:43 PM