Saturday morning saw me climbing out of bed at 3:30 AM to catch up with some friends and go to Cumberland on Vancouver Island for the Mine Worker's Memorial Day. Until that morning I had no idea of that the history of mining on the island was so rich.

Mining in BC really began with coal mines on Vancouver Island and it was one of the most dangerous occupations. The mining industry killed over 295 miners over the years. Forced to work in appalling conditions the miners began to organize and eventually involved National, International and local unions.

Ginger Goodwin, originally from Scotland was a mine worker and supporter of unionized labor and socialism. Like many miners in his time he developed lung disease and was exempt from the conscription until the war began to run out of soldiers and his exemption was overturned. Knowing this was a death sentence he fled into the woods around Cumberland where he was tracked down and shot by the RCMP in 1918. With the debate raging on about whether his death was accidental or deliberate the miners and union workers raised him to martyr status and today this memorial takes place at his grave site. 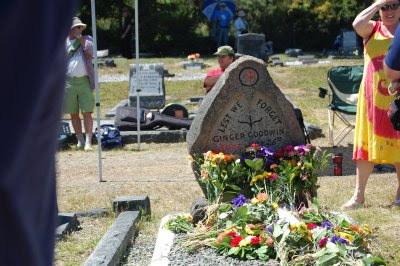