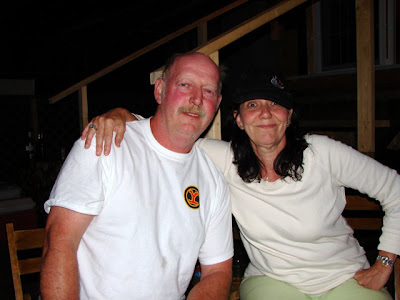 It was our "I'm with Bob Barbecue" fund raiser and by the looks of us we both had too much to drink last night!
It was our second in a series of three fund raisers for the NDP in our riding. We did this one with our President Bob in mind, because it is his birthday this month.
We had a great big cake with so many candles that we had to have someone on hand with a fire extinguisher just in case one of the tents caught fire and we covered his deck in balloons with prizes inside for people to pop! We had a questionair to test people's knowledge about such things as Bob's favorite song with choices such as "Damn I Feel Like a Woman" and "I've got friends in Low Places". Turns out his favorite is "Peggy Sue". Who knew? There were lots of old people jokes and teasing, but true to his style Bob took it all with a grin and threw in a few jokes about himself too!
Brenda, his wife, did most of the food preparations and Bob's daughters helped cook the steaks. They were great. We couldn't have done it with out them and they are great people to work with and be around!
Now just one more fund raiser left and I am all done.
Posted by Catz at 10:30 PM