LNG...Progress or Disaster in the Making?

Most people on the west coast of British Columbia have a love affair with the ocean and all that it means to their life. The people who live on the small islands that dot the coast are even more passionate about life on the water front and develop a lifestyle that is somewhat different from those on the mainland. They are less concerned with the material things and more concerned with the creative side of life. They enjoy the solitiude that island life gives and they find creative inspiration in the beauty and serenity that surrounds them on all sides.
The residents of Texada Island, off the coast of Powell River, have been told that big business is moving in and they fear that their way of life will be lost forever. Westpac is planning on putting a Liquid Natural Gas (LNG) import terminal and natural gas-fired generation facility at Kiddie Point. The Island is somewhat divided. There are those who feel that this might bring jobs so their kids can stay on the island instead of having to go to the mainland to find decent work, but there are others who feel like Andrew J. and Pam Mackenzie who wrote this very emotional statement on Texada LNG News "It feels like rape--something very nasty and totally unacceptable being forced on someone" 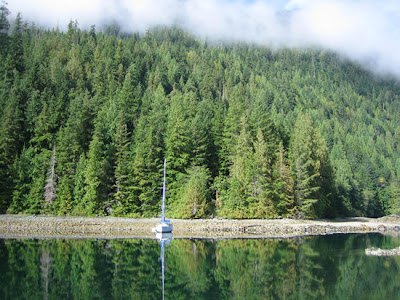 Having grown up on the west coast water front I understand their passion. Even though I don't live there any more I can' t bear the thought of ruining such a beautiful pristine area and I wonder what will happen if we have an accident at this plant. My friend who I have known almost all my life lives on Texada. Jamie and his wife Heather built their own home on the island and raised their two boys there. Jamie is a folk singer - song writer and he has written the following poem to express his feelings about the LNG.
Gas Pains
Its you and me and LNG
Yes indeed the gas
Extra mental pain it is insane
Somethings are hard to pass
Some players tell you what sounds good
Promise you the moon
But truth be known Bucks the spud
and the loonie calls the tune
So what about the other things
About the lives we live
Why must we dance on strings
and lose what we can't give
And who has got the right now
Cram this down our throats
Lets have a referendum
And see if this ship floats
by Jamie Nuotio
Posted by Catz at 9:06 PM