What Next? Frogs or Locust?

Yesterday we had about 6 inches of snow in the driveway. It did not quit snowing most of the day before and all day yesterday. However late yesterday afternoon it all changed around and the snow turned to rain and right now it is raining so hard that the roads are flooded and some highways are closed! The weather man told us this would happen, but me ever the skeptic thought that was ridiculous and chose to shovel my driveway instead of waiting for it to be washed away like the rest of my neighbors. I will just tell everyone I needed the exercise.
The weekend snow fall gave me a much needed break as all the functions I was to go to were canceled and I spent most of th weekend getting caught up on housework and some office stuff. However yesterday, despite the snow, I spent part of the day outside with Lucy. Lucy as you can imagine loves the snow and her favorite game in the snow is snow soccer! 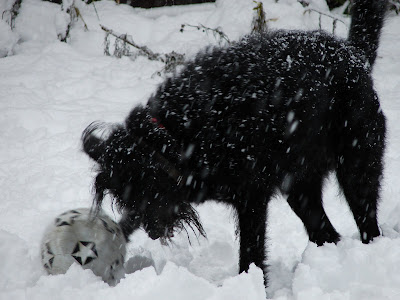 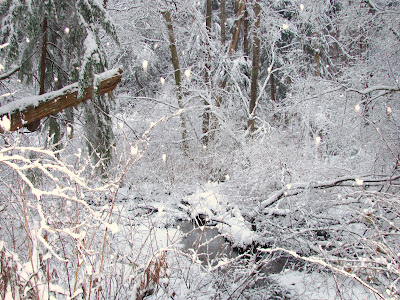 Later in the afternoon we went to the Canyon with my friend Chris and his dog Kiera. It was like walking through a fairy land with all the trees covered in snow. The branches were so loaded down it covered the path and if I had not been there many times I would have easily lost my way. I took the camera, but the weather was so nasty I did not get very good pictures as I was afraid to expose my camera for any length of time. I fell several times and came home soaking wet!
Today we are supposed to have winds of 80k to go along with the floods!
Posted by Catz at 6:40 AM